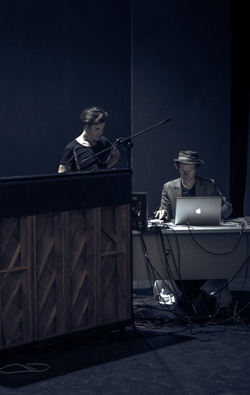 
Composed, arranged and produced by Andrea Manzoni and Marcel Zaes

Sjö is a duo project involving the electro-composer-performer Marcel Zaes and the Italian pianist-composer Andrea Manzoni. For their first album, the duo developed a musical language blending contemporary electronica with “radical sound research” and reductionist mathematical structures. The connection between Andrea Manzoni and Marcel Zaes was formed in 2012, when Marcel Zaes sojourned at the Swiss Institute in Rome as a resident artist. Manzoni and Zaes began holding conception and recording sessions and were supported by the Teatro Stalker in Biella. Their first release ‘Sjö’ contains seven original compositions by Manzoni-Zaes, on which the pair have worked for two years – their music is technically complex and requires significant studio time. The title ‘Sjö’ is Icelandic for ‘7’. In Swedish the same word means ‘lake’ or ‘sea’.