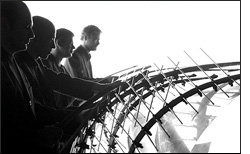 
Composed, arranged and produced by Stahlquartett

The STAHLQUARTETT was established in 2001 with musicians from the 'Steelharmonie' which was founded in 1999 by the musician and instrument maker, Jan Heinke. It brings together classical and jazz musicians. Their instruments, constructed out of steel by Jan Heinke, are known as Stahlcellos.

The group's repertoire consists of their own compositions, and also a wide range of works from classical to contemporary.
The unique sounds created by the steel instruments lift these compositions out of their various origins in time and unites them in a common context shaped by the qualities of the instruments.